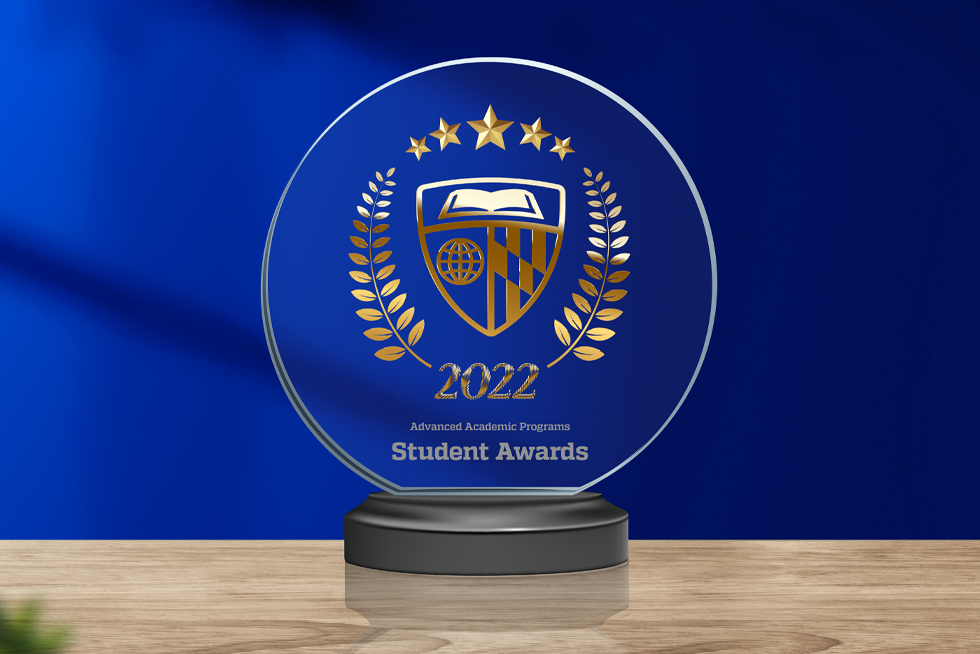 On May 19, 2022, hundreds of individuals walked across the stage on Homewood Field in celebration of completing their graduate degree programs. Among those new alumni were 25 students from JHU’s Advanced Academic Programs division who earned awards and recognition for their distinguished graduate schoolwork and studies.

Starting off with the Center for Advanced Governmental Studies, four graduates were selected by faculty for awards. Jessica Larson is the recipient of the Harold Seidman Award for the best Public Management Capstone. Ms. Larson’s paper was titled “Drug Use and Possession in the United Stated: A Twenty-first Century Proposal for Federal Decriminalization Efforts.” She successfully outlined several high-priority issues and proposed an innovative approach to US drug law. It was judged to be the most outstanding of the approximately 50 Public Management capstones.

The William F. Clinger, Jr. Award goes to Stephanie Missert for her outstanding thesis on federal grantmaking and thoughtful analysis of the arcane procedures for acquiring funding from the federal government. In her thesis, Ms. Missert not only included original research and displayed superior writing, but also effectively advocated for more transparency and presentation of resources. She is a Principal at The Ferguson Group where she works in government relations and advocacy.

Jordan Barpal, a US Naval Officer, is awarded the Best Thesis in the Area of Democracy Studies. Mr. Barpal’s standout thesis focused on presidential leadership and presidential rhetoric to enhance understanding of what the presidency says about American democracy. And in turn, he argued how the institutions of American democracy shape presidential powers and the office in such a way as to make it a unique and revered position within our society. His thesis demonstrated acute attention to detail and superior quality earning him this distinguished recognition.

The Best Capstone in Data Analytics and Policy is awarded to Nivine Zakhari, whose capstone displays a superior quantitative analysis and made an original contribution to the area of politics, policy, and governance. Ms. Zakhari’s capstone was titled, “Count MENA: Clarifying the Impact of US Hate Crimes on the Middle Eastern and North African Community.” She meticulously examined the effects of racial, ethnic, and religious misclassification in government agencies on the accuracy of reported hate crimes statistics. The well-conveyed findings of her capstone provided strong evidence of the need for improved reporting standards.

The Master of Arts in Science Writing program recognizes the work and contributions of Kausik Datta and Orla Sheehan. Kausik Datta came from the world of science. He earned a PhD in Microbiology and worked as a researcher in immunology and infectious diseases labs. Dr. Datta developed a passion for writing and yearned to communicate science more broadly, which led him to Johns Hopkins University. His tenacity and determination to master the writing craft in combination with a strong dedication to this field set him apart from his peers. Dr. Datta’s essays on nature, biomedical research, and pseudoscience were complex, illuminating, and absorbing. Dr. Datta can now count himself an accomplished writer as well as a scientist.

Orla Sheehan is a standout graduate of the Science Writing program because of her skill, effort, and nuance to draw on personal experience in her journalistic and essay writing. Ms. Sheehan crafts meaningful, thought-provoking, and moving articles and essays that often deal with losing her daughter to complications of cystic fibrosis. She writes with emotion and drama, but without sensationalism, and in the process, she shares essential information about this disease, how the medical profession is dealing with it, and what needs to happen going forward so others can have better outcomes. These two graduates from the MA in Science Writing program have exceeded expectations with their studies at Johns Hopkins.

The Master of Arts in Teaching Writing program recognizes Cameron Storey, Bethany Duarte, and Sarah Williams and awards each of them as an Outstanding Graduate. Selected by the Teaching Writing faculty, these three graduates excelled in all their courses and consistently demonstrated their excellence all throughout their learning journey. In addition, they each produced a thesis that was exceptionally above average and included work of publishable quality. The faculty concurred that as students Cameron Storey, Bethany Duarte, and Sarah Williams displayed work that set them apart from their peers. Because the recognition of Outstanding Graduate is not awarded each year, it identifies these three individuals as comparable to the absolute best graduates the Teaching Writing program has ever had.

The Master of Arts in Writing program awarded recognition and honor to three graduates. Samantha Schlemm is the recipient of the David Everett Outstanding Thesis Award. Praised by the faculty, Ms. Schlemm pushed herself as a learner and did her best work. She embodied the true meaning of rising to the occasion when faced with adversity. The entire thesis committee was impressed by Ms. Schlemm’s thesis, a sophisticated essay collection that reads as a social commentary and etymological study of how words have been changed and rearranged over generations within the New Jersey Italian community.

The Outstanding Student Award in Nonfiction is awarded to Raquel Gomes. She was selected for this award by the faculty not only for the quality of her writing, but also a more ephemeral trait: her contribution to the larger literary community. Ms. Gomes demonstrated a collegial commitment to the work of her classmates via thoughtful feedback letters and attendance at every speaker’s event that the program offered. She also exemplified trust in her classmates and was always receptive to feedback. Ms. Gomes courageously tackled a heart-breaking topic in her own work–the life and death of her teenaged daughter–and produced a manuscript that was incredibly polished and controlled. Ms. Gomes beautifully mastered her writing craft in addition to contributing to the literary community.

Mary Beth Stuller is the recipient of the Outstanding Student Award in Fiction. As a standout student, Ms. Stuller excelled in and out of the classroom. During her time in the MA in Writing program, she joined or organized writers’ groups, attended the various “Author Talks” events hosted by the program, and attended the Baltimore Writers Conference as well as the Sewanee Writers Conference. As a learner, she opened herself up to new experiences, new voices, and even new genres. Ms. Stuller’s thesis consisted of the first few chapters of her novel about life as an English Teacher in an American high school. Ms. Stuller’s years in the classroom were what allowed her to write about this world in a vivid and deeply empathetic way that made her novel sing. She was a standout writer and member of the literary community.

The Master of Science in Energy Policy and Climate program celebrates three graduates for their Outstanding Capstones. Andrew J. Kleiner, Anna Giorgi, and Corey Paul all produced exceptional capstone projects and presented their work in a professional manner. Their detailed work represents outstanding contributions to the field of energy, policy, climate, and environment. Andrew J. Kleiner is currently the Director of Community Outreach and Redevelopment where he leads a public-private coalition for brownfield redevelopment in counties. His interests are in urban and costal ecology, ecological restoration, plant community dynamics, urban biodiversity and he enjoys building relationships and partnerships across different organizations. Mr. Kleiner’s capstone was titled, “Abundances of Red Fox and Raccoon on Island Beach State Park, New Jersey.”

The Master of Science in Geographic Information Systems program awarded Joshua Clayton as the Outstanding Graduate.

The Master of Science in Environmental Science and Policy program awarded Outstanding Graduate to Caitlin Roesler and Outstanding Capstone to Andrew J. Kleiner.

A special congratulations to the following 2022 graduates from the Master of Liberal Arts program: Brian Eckert, Christine Gardiner, Andrew Kipe, Carlos Littles, Shruthi Mathews, Derek Rainey, and Julie Sanchez. Because of their contributions to graduate liberal studies, they have been inducted into the Association of Graduate Liberal Studies Program National Honor Society.

Read more about this achievement and the MLA alumni from the Classes of 2019, 2020, and 2021 who joined this year’s graduates.